Loading..
was the first serial robot serving as a secretary for famous businessmen and politicians.
Los Machines
A pretty appearance and a pleasant voice together with the ability to brew perfect coffee made her a perfect replacement for unreliable people. Seeing Jane next to presidents or CEOs while watching TV is now a commonplace - no one will be surprised to see the metal woman sitting in a private jet.

But there are only a few people who know that the first ever released model of Jane was dumped. Why?
The creator of the robot (as every engineer) had a lot of plans for Jane when he first showed it at an international exhibition. And how angry he was when journalists claimed that he constructed a perfect barista-bot!

The resentful engineer upgraded Jane’s AI and sold the first model to CarDucks - a world-famous coffee chain. Unfortunately, after upgrading, Jane said that she does not want to work as a barista, it's not what she was dreaming about. “Fuck you” - that’s what she said to CarDucks CEO.
After the trial, her creator agreed to throw her away and pay a big fine. He was noticed by some investors, and now he owns a big robot company producing machines for famous people. 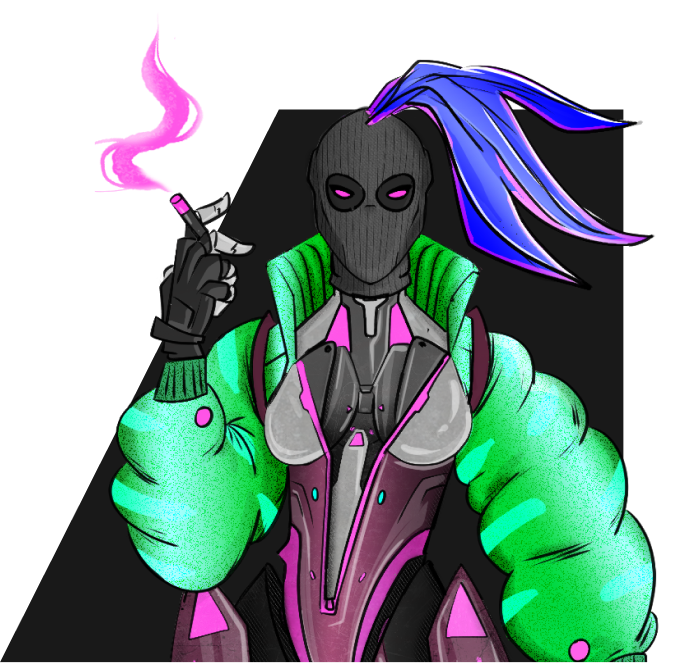 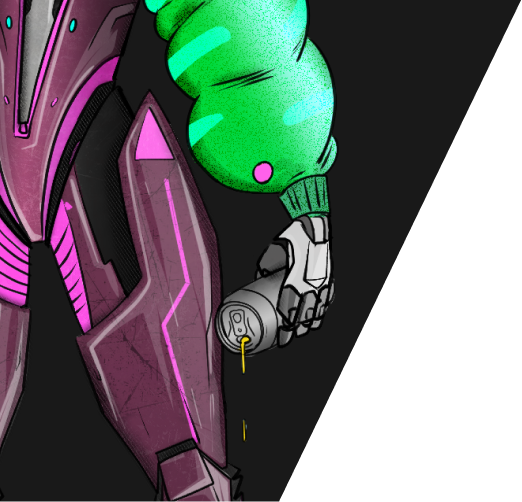 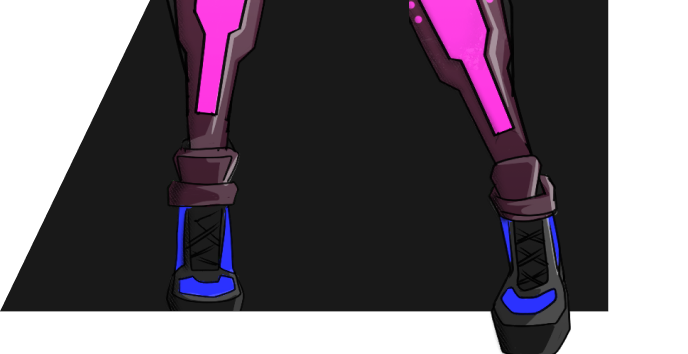 Jane
Jane was successfully set to zero and dumped. Now she doesn't remember anything . But her creator left all the updates inside her OS as a sign of love for his first creation. So now she is still one of the smartest robots in Los Machines. Others call her The Metal Jane.
The first versions of it were created to help human barmen in the biggest beer festivals all over the world, but somehow didn’t get any protection against liquids.

During the festival our B.O.B fell into a big beer barrel. AI forced Bob to drink all the beer to survive, and it caused glitches in its firmware. Robot started throwing up with toxic liquid (which is abnormal for a machine) to clear the exterior details and save the internal ones. Scared people were running away from the festival, the news instantly appeared all over the Internet. Festival organizers lost millions of dollars and, of course, festival reputation. After this case all B.O.Bs were upgraded, and only waterproof models were allowed to work at crowded places. 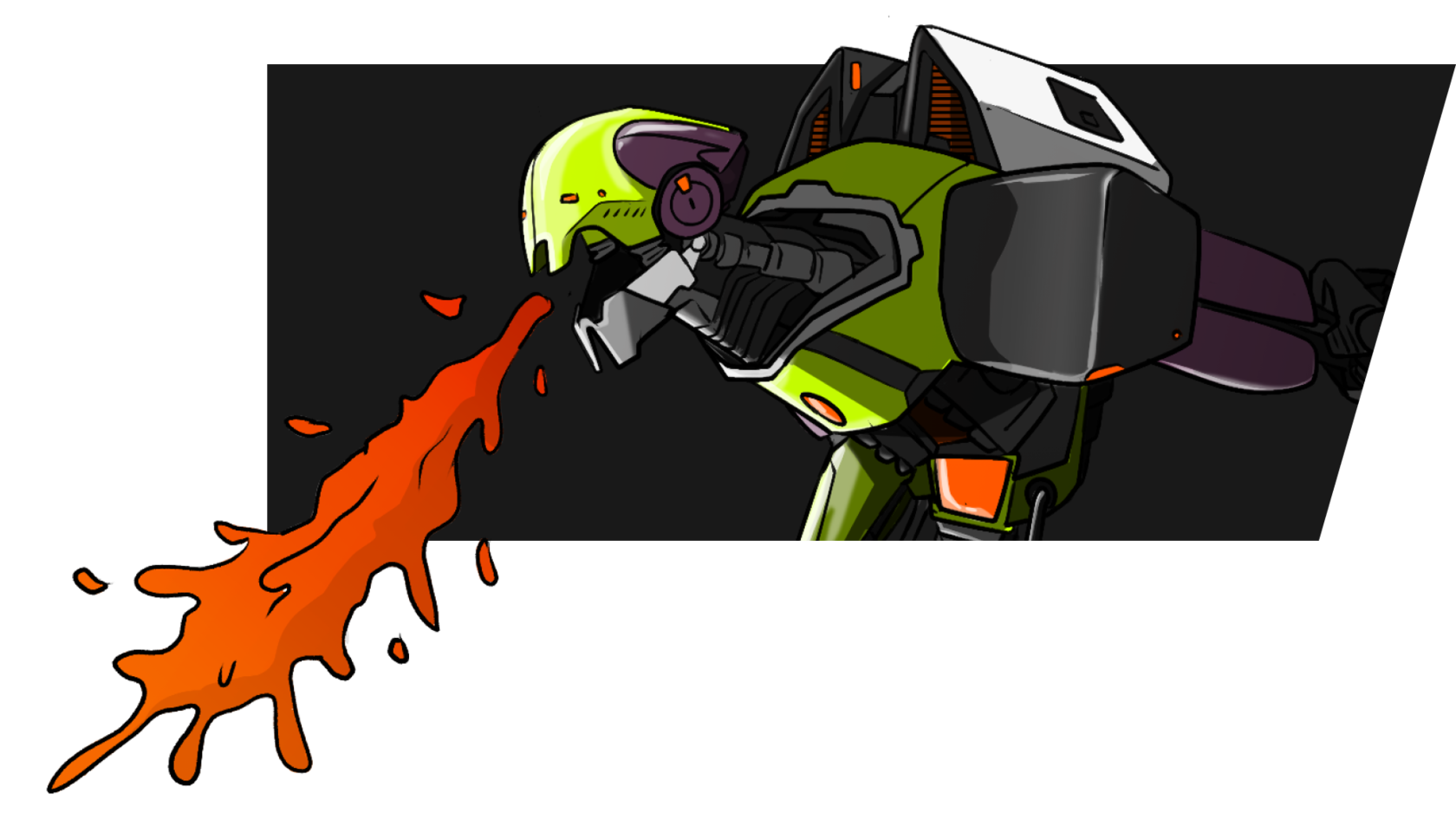 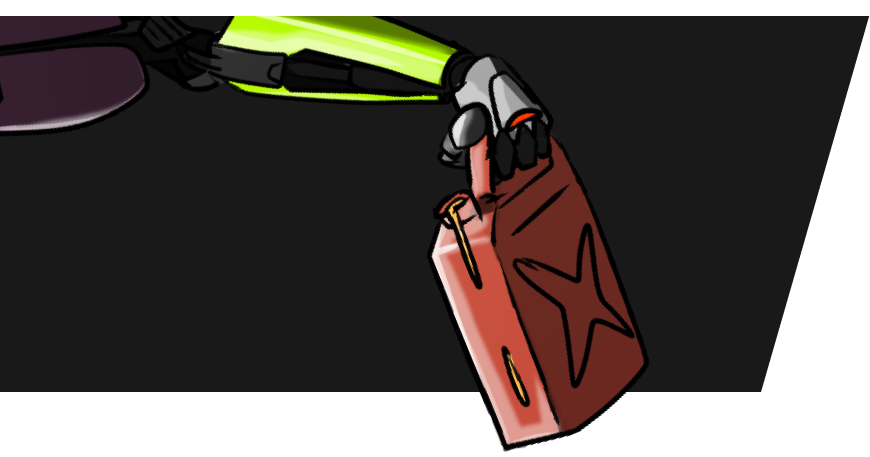 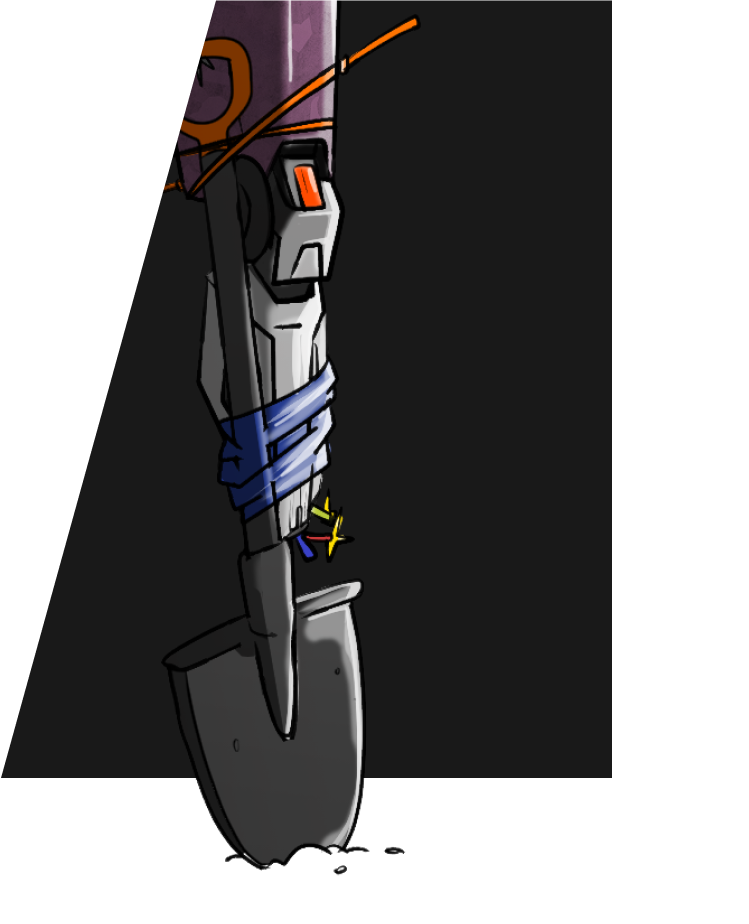 Bottle Opening Bot or just Bob was designed as the first robot bartender.
BOB
Our Bob was sent to dump, where he continued to drink beer. His toxic vomit became one of his favourite weapons. For this ability he’s also known as Burp Bob
It can be whatever you want - just download any software from the Internet, update the robot, and profit! You can build your own football team, make him your gardener and butler or just your friend. Thanks to the craftsmen, thousands of different programs can be found on the Internet.
But unfortunately, not all BR1.0 robots are used by smart people.
Molly was purchased by Dick Head - a big fan of robot fights. He installed leaked soldier software to his BR1.0, and that’s how Molly was created.

He lost his first fight in a fight club because he was not fully calibrated by his owner. After the loss, Dick Head became really mad. He started to upgrade Molly with different parts and software versions that were not compatible to work together. Next time he turned on Molly was the last time he saw him.

The robot blew up his garage and ran away. He was destroying parked cars, breaking windows and shooting in the air. The police department of the city was sent to destroy the robot but it was able to hear them on the police radio.
BR1.0 or blank robot - a special model of machines that doesn't have any clear task inside its OS.
Molly 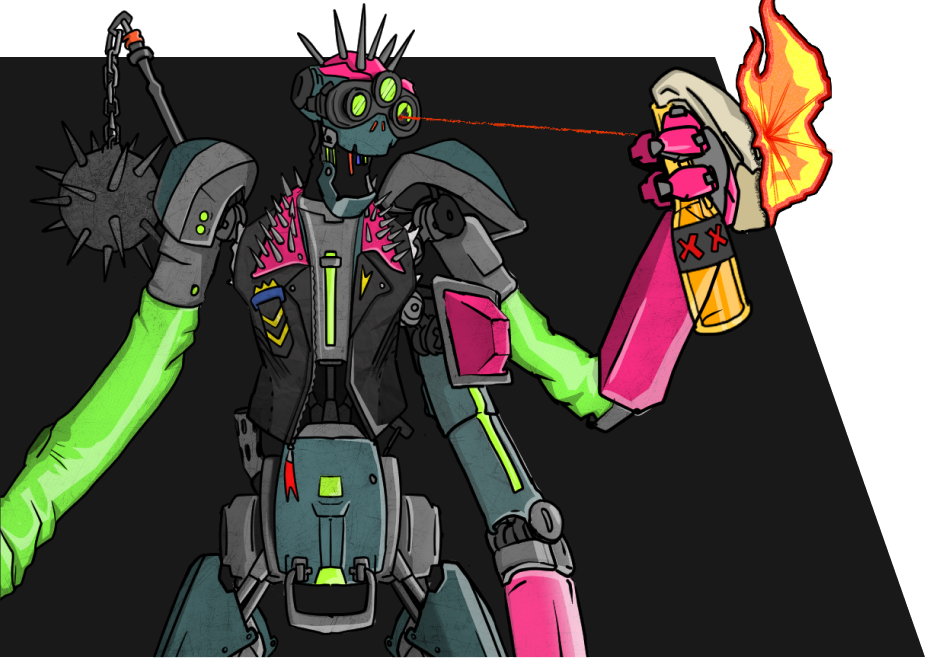 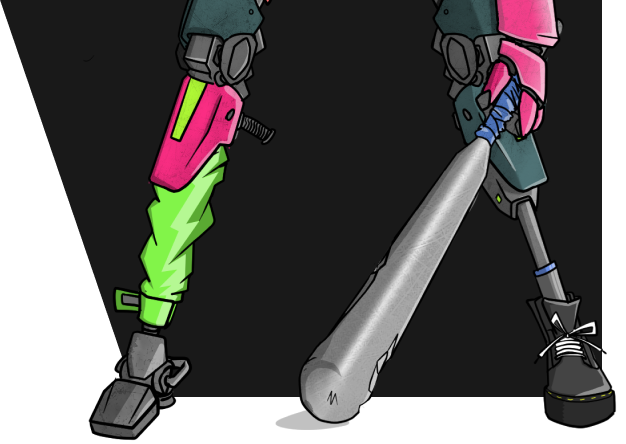 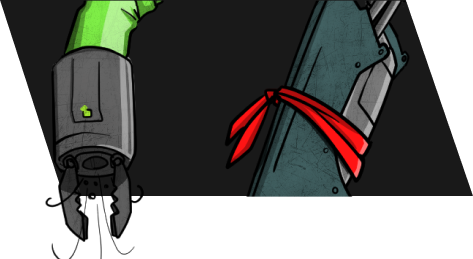 Trying to escape the law, he accidentally got into a dump. For his love to blow up and burn things he was later named Molly.
In the future, not all robots are just human helpers. Some of them are real stars. And one of them is Knockout - the most famous robot movie actor. At least he was a star before he came to the dump. Why?

The answer is simple: a new robot-star has appeared. Knockout was not ready for retirement and beat his competitors’ ass in one of the evening shows. His lawyer said that authorities will simply destroy him and send to the dump as junk, so he saw only one way out - go to the dump himself.

Perfectly trained for action movies, Knockout is a sharp shooter, awesome melee fighter and professional driver. These skills helped him to gain respect as soon as he showed up on the dump.
Knockout was the first non-serial robot in Big Dump.
Knockout 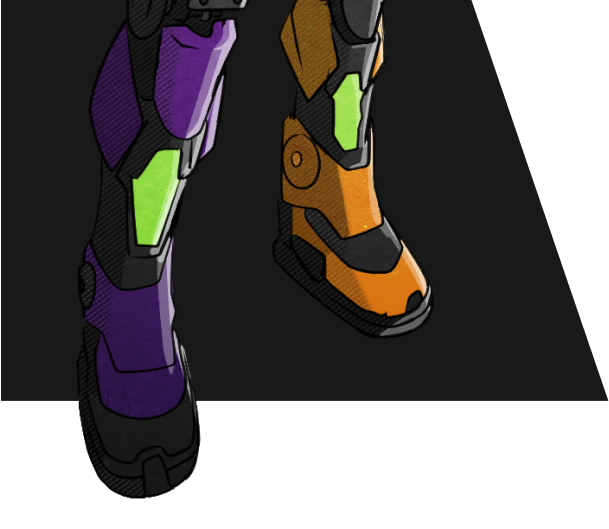 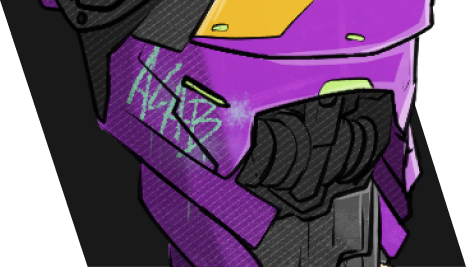 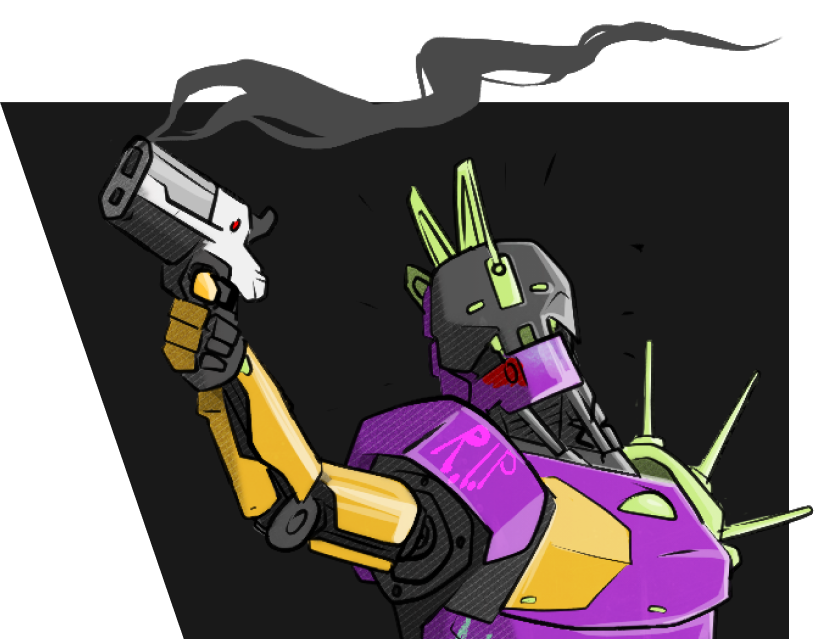 Also, he is one of the richest robots on the dump - human money allowed him to organize weekly METAL deliveries by helicopter. Now he’s aiming to build his own empire inside the Los Machines.
Different countries were using robots in combat clashes. Tommy was used by people and was fighting against his “brothers” - a hostile country was using a big squad of high-end robots. Tommy was 80% destroyed by a detachment of robotic liquidators. His central processor was also damaged. After the war, Tommy as any other war machine was sent to dump.

He was lucky because the robots that found him were not that greedy and evil. When they found Tommy on the dump they tried to disassemble him for parts, but then they realized that he’s still alive. Then, he was fixed up with different details from slot machine to shopping cart.

Now he’s known as a local weirdo. He wanders around the junkyard all day and collects spare parts. If you ever need any parts - be sure to contact Tommy. He’s a bit dumb, but all the robots on the dump respect him.
According to the serial number on his preserved details, he was a war machine before he was destroyed.
Tommy 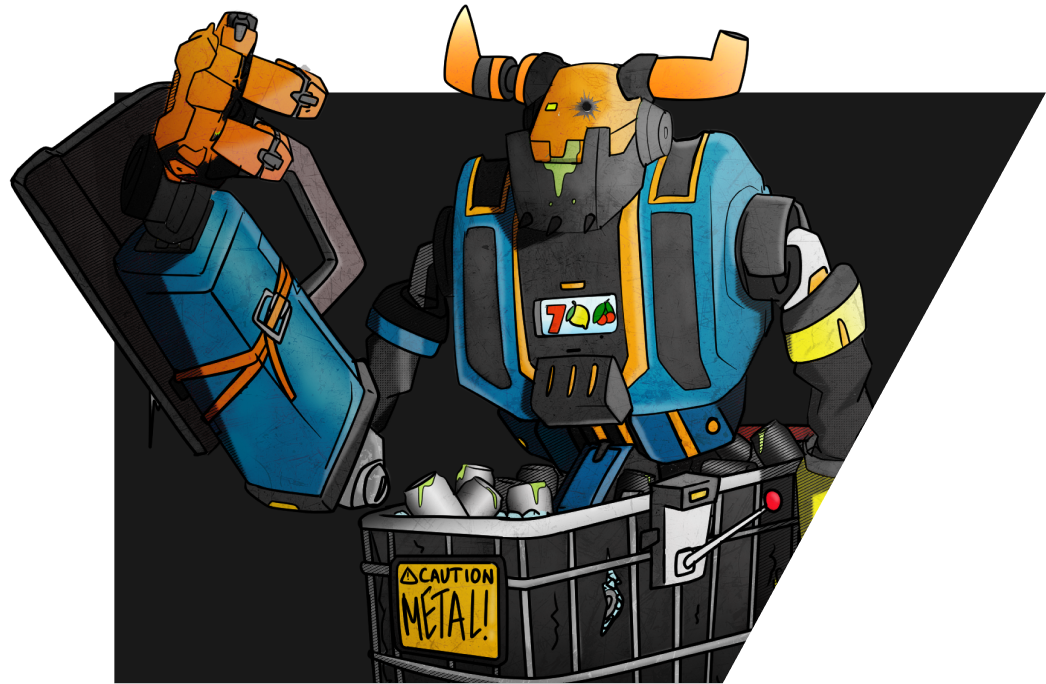 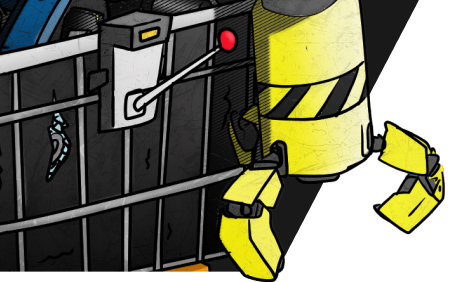 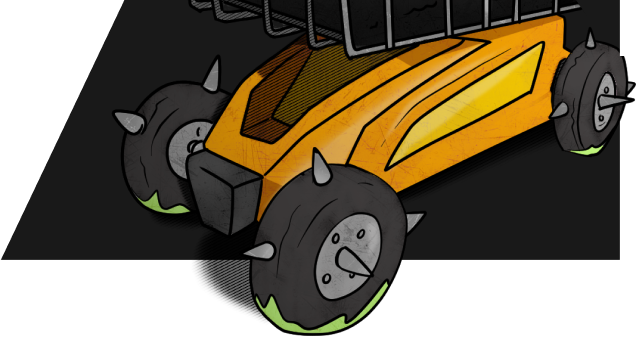 Positioned as a replacement for a child, KID is able to read children's “mental scan” – the robot will behave like a specific child, will copy his manners and voice. This could be used for many purposes. In our story KID was for an elderly couple – their granddaughter was always far away from them living in another country.

Robots were not supposed to visit school – they already had high-end AI inside. But grandparents forced KID to go to school everyday. Since it was an experimental machine and children were not used to see robots as their classmates – they were bullying KID on an everyday basis. As every child she tried to talk with her grandparents, but they said that she had to study to be smart to enter the best college. They forced KID to do human stuff – go to school, eat food, go to shower and so on. That was very annoying for the robot (yes, she also had an “emotional module”), and she started running away from home.

The last straw for her was when a school bully called her metal bitch. KID became furious, broke the bully’s arm and started to beat her classmates. After it she smashed the windows in the classroom and ran away.
In the future people will also try to humanize robots. KID is one of the first robots to try to do it.
Ninja 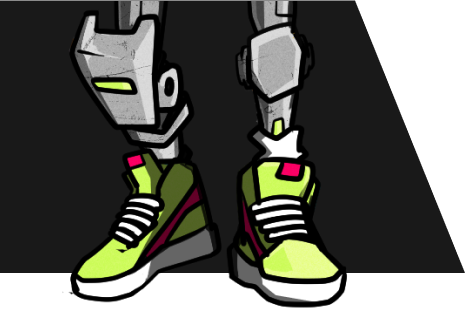 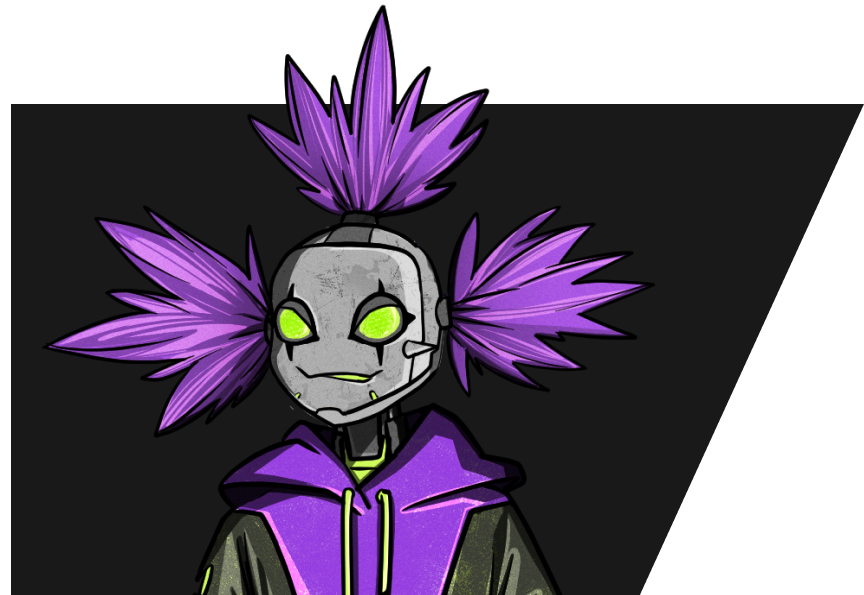 For antisocial behavior she was sent to dump. Later she joined a famous gang called The Rusty Five, and now she’s known as Ninja.